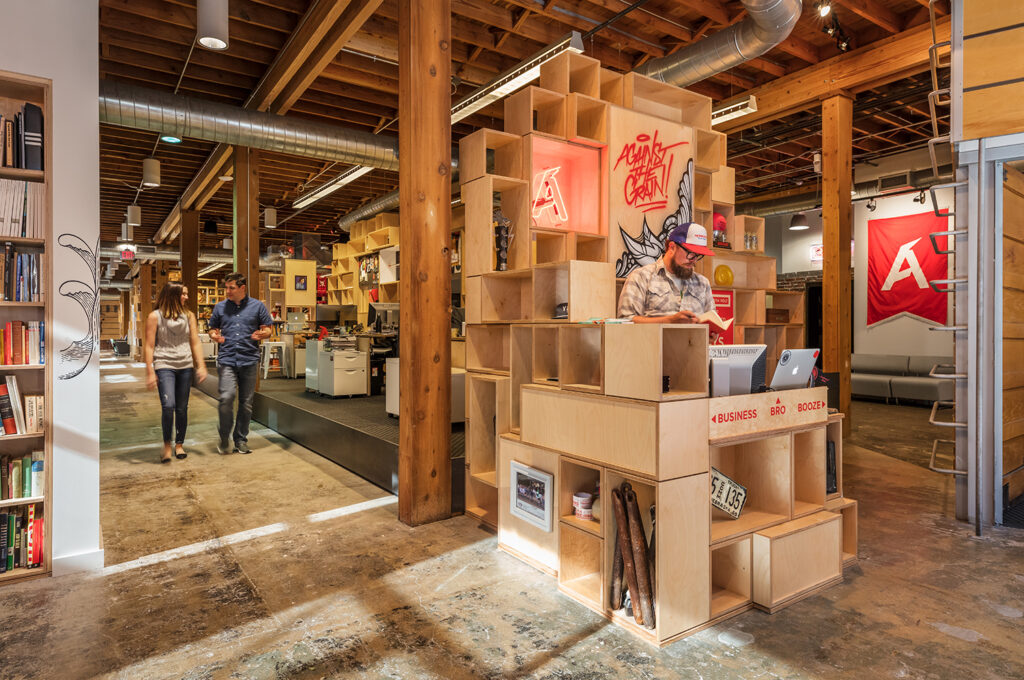 Archrival, a creative agency with an expertise in youth culture, was in need of an interior renovation to embody the personality and ethos of the company. Over the past 20 years, the agency has acquired a number of curious objects – trophies, artwork, nerf guns, luchador masks, sombreros, etc. These curiosities contribute to Archrival’s unique culture, yet can easily clutter an office environment. Working with high-profile clients such as Red Bull and Adidas, Archrival needs an office space that communicates trust, yet still celebrates their culture. 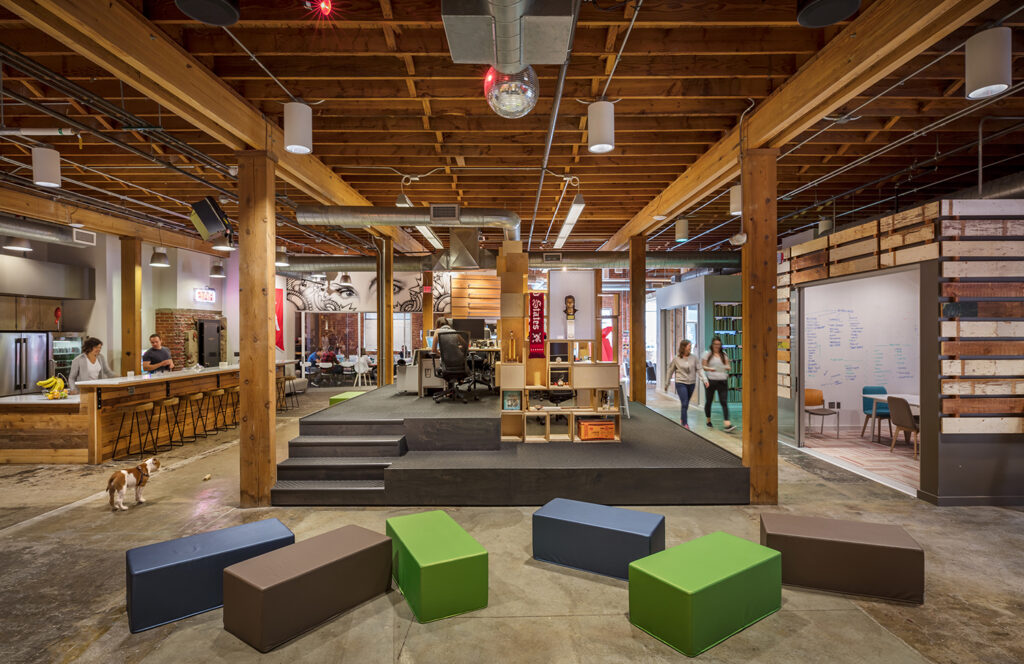 Archrival is headquartered in Lincoln, Nebraska’s Historic Haymarket District. The single-story, 1920s vintage building consists of brick exterior bearing walls and heavy timber post-and-beam infill, with a sloped wood roof structure. The design celebrates the richness of the existing material palette. Concrete floors are sealed and left exposed, paying homage to the previous decades of use. 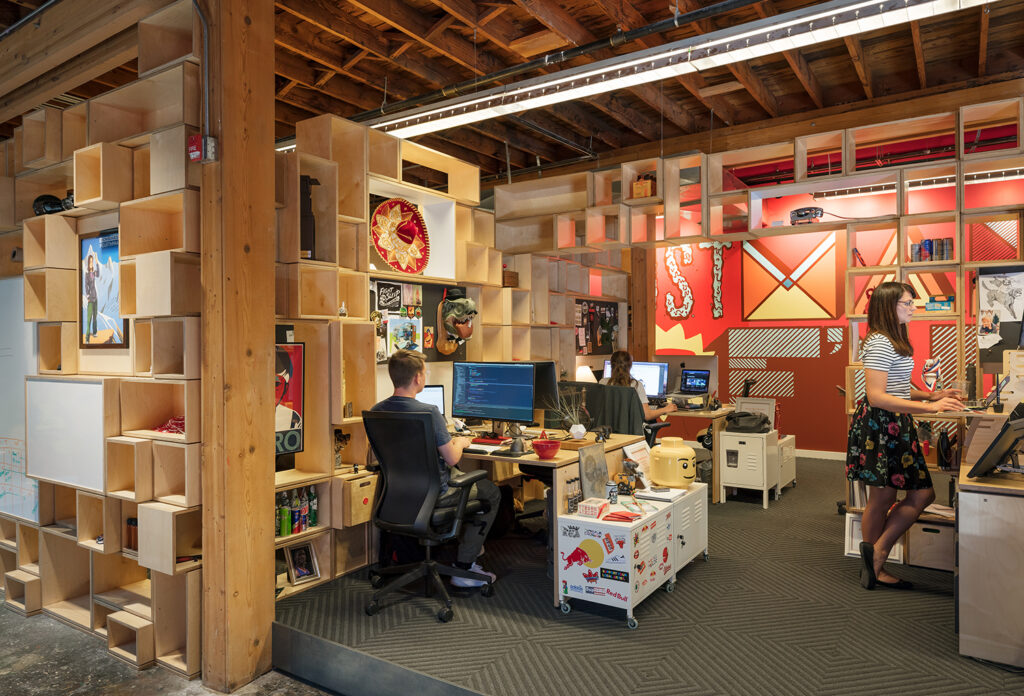 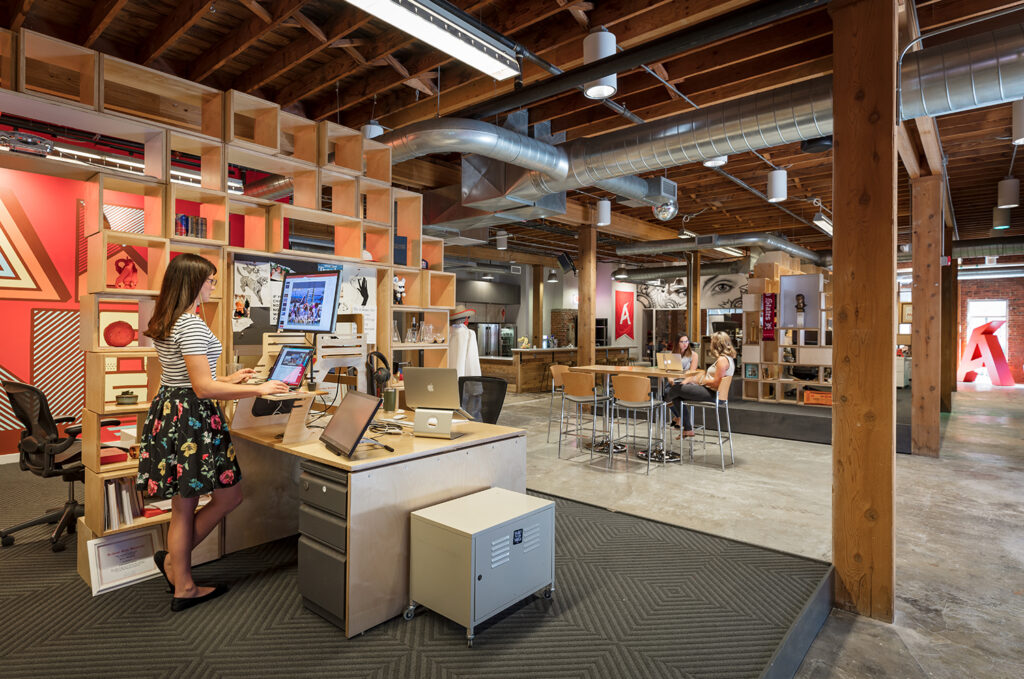 The office design is organized around the wunderkammer, – German for “cabinet of curiosities” – a place where a collection of curiosities and rarities are exhibited. During the Renaissance, items were displayed in cabinets in an attempt to stimulate creativity and wonder. More than 700 baltic birch wood vitrines run the length of Archrival’s office, creating a semi-transparent wall and a contemporary version of the wunderkammer.

While curating the creative objects of Archrival lore, the wunderkammer is more than a display system. It is a rigorous organizational system serving as the literal spine of the space. For any office space seeking to be a creative hub, staff density is an important design element – it is a direct contributor to energy and liveliness in the space. Individual workstations emerge from the articulated display positioning staff as an integral feature of the wunderkammer collection. Additionally, workstations are elevated on raised platforms, creating hierarchical separation between staff, circulation, and meeting spaces. 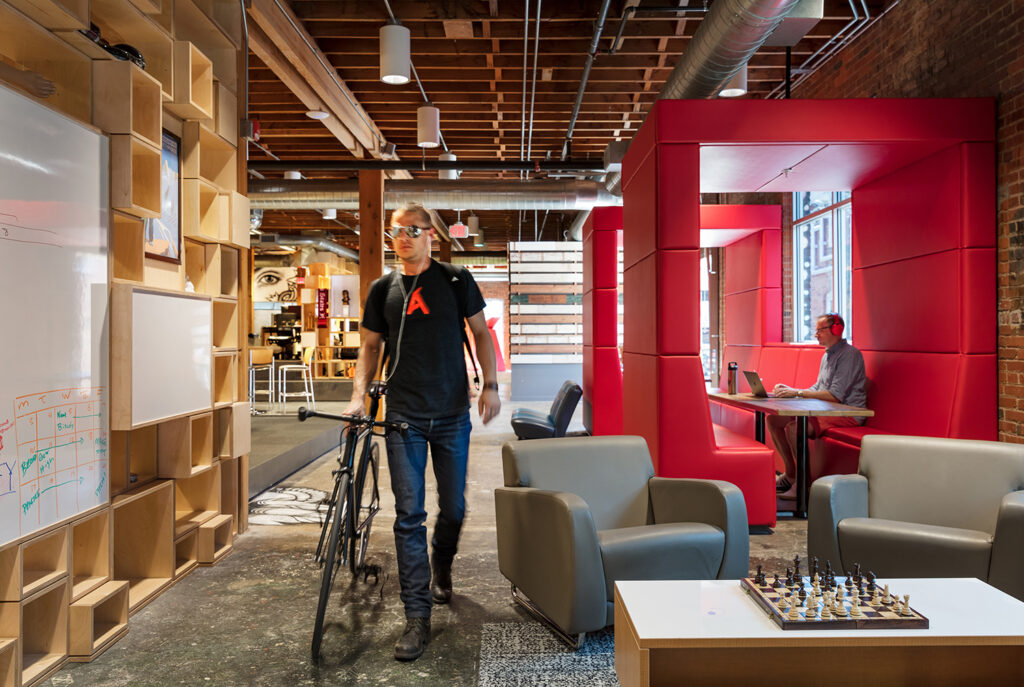 In contrast to the staff workstations, open, semi-open, and enclosed meeting spaces are organized around the periphery of the 6,700 square foot office space, creating separation between individual and group spaces. Strategically locating group meeting areas adjacent to private workstations increases the opportunity for chance encounters: unscripted meetings between coworkers who might not regularly interact.

It is believed that chance encounters foster collaboration and increase the potential for innovation given the organic nature of the meeting. 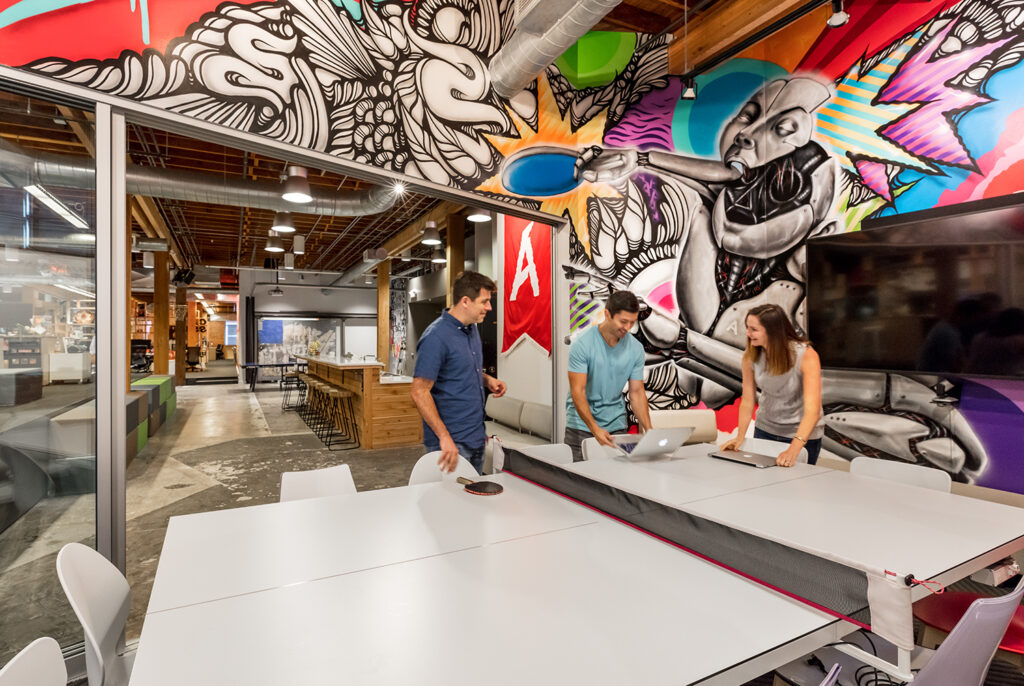 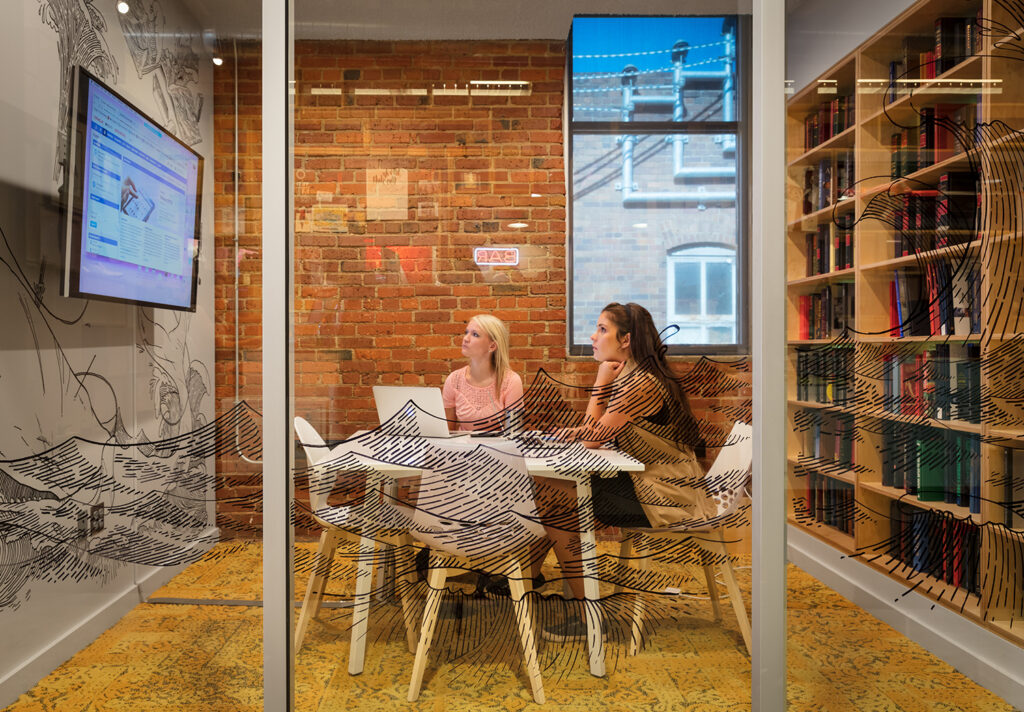 As with any creative agency, there are a myriad of different tasks occurring throughout a given work day. The diverse collection of meeting rooms and workstations allow Archrival Agents to find the right space for the right task, embracing the idea that spatial diversity adds to increased productivity among staff. Meeting rooms are further articulated by an eclectic, yet sophisticated mix of artwork and super graphics, all contributing to the complexity and awe of the Archrival Wunderkammer. 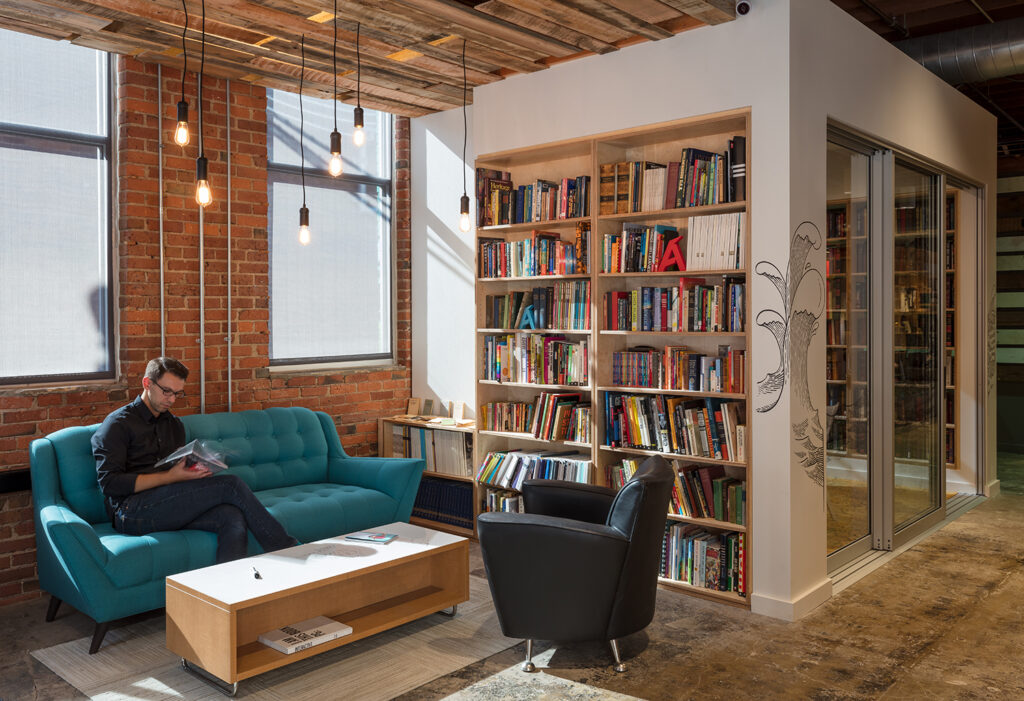