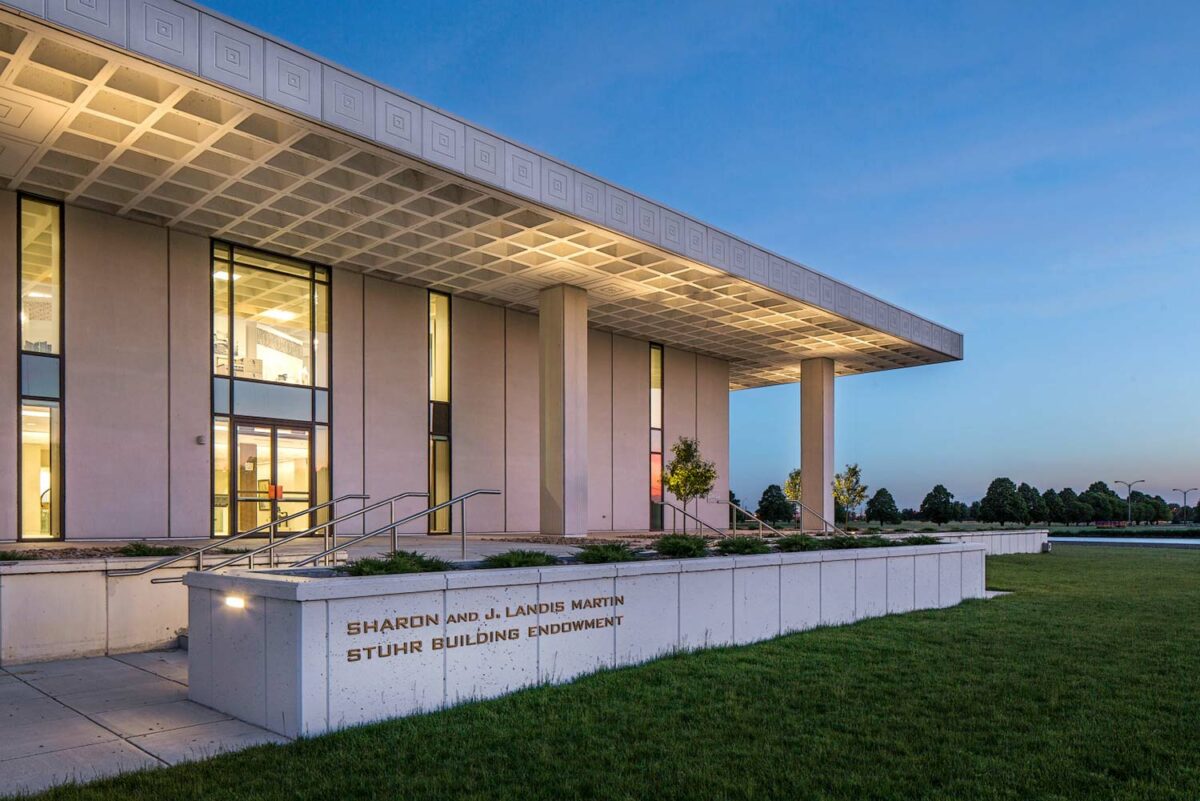 Mid Century Modern in the Midwest

This article originally appeared on Docomomo-US.org.

Search for modernist architect Edward Durell Stone and you will discover his seminal works, such as The Museum of Modern Art, the John F. Kennedy Center for the Performing Arts, and the American Embassy in New Delhi. Some of his works are praised, others dismissed, as he layered decoration and pattern upon International Style basics. A recurring theme is that he was the arbiter of good, or tacky, taste for the middle class. New Formalism, or maybe pre-Post Modernism. Robert Venturi without a sense of humor? But that’s another story.

What will not show up in your initial search is the beloved Stuhr Museum of the Prairie Pioneer in Grand Island, Nebraska. Stone designed this landmark in 1963, the result of a naïve yet ambitious building committee who simply asked the major galleries and museums of the nation who they would hire to design for them if given the chance. The resounding answer was Stone.

Grand Island is a city of 50,000 today, roughly half that in 1963, located on the Platte River and Route 80, about 90 miles west of the state capital of Lincoln. The museum collection is primarily composed of 3D artifacts relating to Nebraska’s pioneering days. Also on the 207-acre site is Railroad Town, a pioneer village set in the late 19th century, a recreation similar to Williamsburg, Virginia. 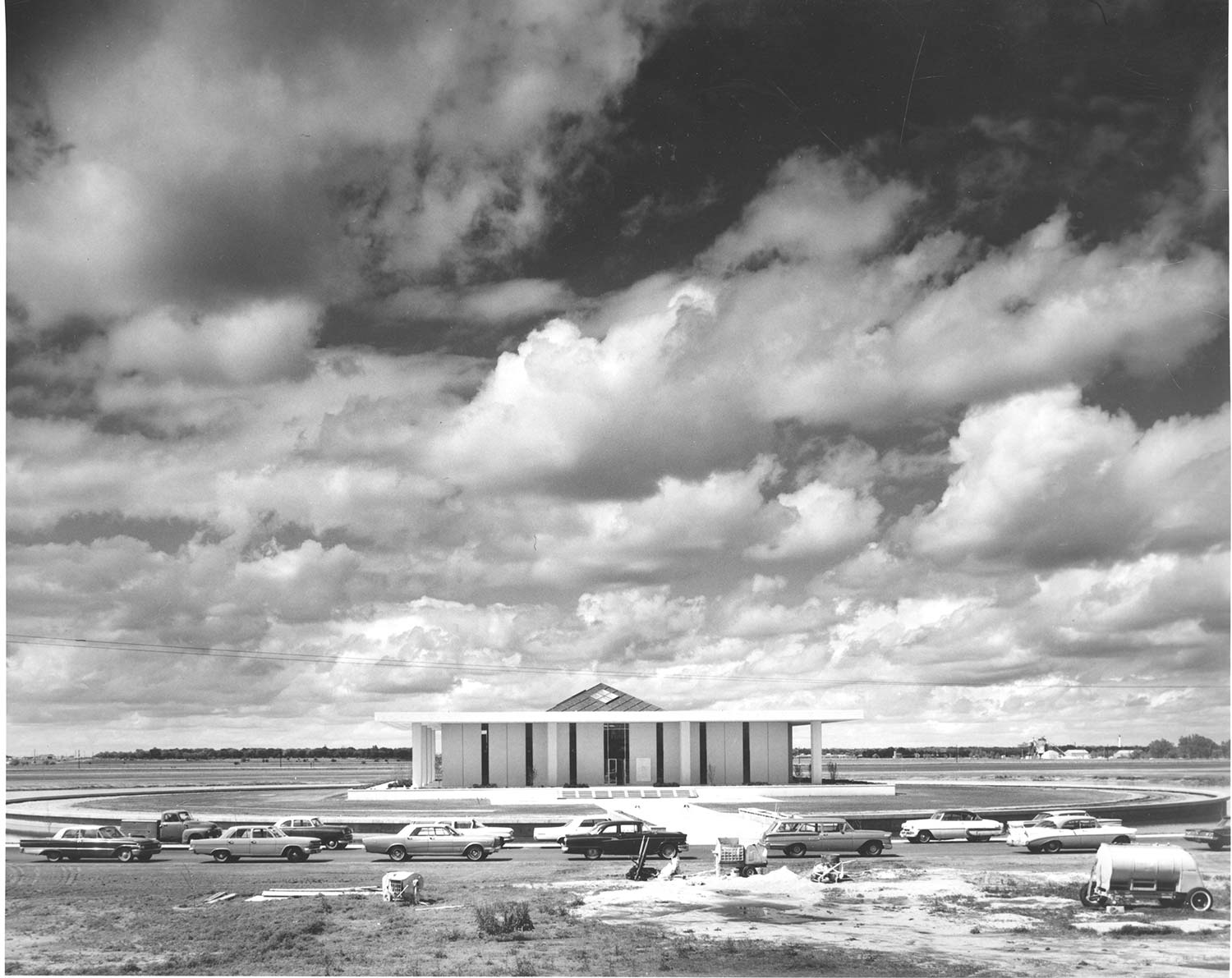 You see the building from a great distance, centered on a round island within a round lake, approached by a long boulevard that circumnavigates the lake. You drive half way around before reaching the pedestrian causeway that stretches across the moat to the main entrance. When leaving you drive around the other half of the lake, thereby experiencing the perfect symmetry of the square building from all sides. It is monumental and resplendent with Stone’s signature style inside and out. The two story, square building is wrapped in a portico of slender square columns supporting a massive waffle slab, flat roof with a deep overhang, and a pyramidal skylight rising at the center. Windows are narrow vertical ribbons from plinth to roof with spandrels at the second floor. The building was designed to be poured-in-place concrete wrapped in large marble slabs, but budget constraints precipitated the value-engineered solution of CMU structure covered with a textured off-white, plaster-like matrix with marble chips called Granulux – a wonder product of the era.

The monochrome exterior aesthetic was carried throughout the interior with white terrazzo on the main floor, interior structural columns finished with Granulux matching the exterior, and white carpet on several exhibit walls. The entry sequence takes the visitor through a wide hall with a low ceiling to the center of the building, then to the watergarden, where the space opens horizontally into the main floor gallery space, and vertically to the skylight, with streaming natural light upon the grand curving, floating double staircase, interwoven with four square pools of water with fountains and planters overhead. The second floor is dedicated to exhibits, while the periphery spaces on the main floor contain the gift shop, meeting rooms, restrooms, curatorial, and mechanical spaces.

BVH Architecture was engaged in 2007 to evaluate the physical condition, code, and ADA accessibility issues of the building, and to develop a master plan for an evolving mission. To the delight and dismay of the architects, the building was found in virtually original condition. Single pane windows, no insulation anywhere, extension cords everywhere, and a mechanical system that relied on a constant worldwide search for parts on EBay to keep the 40-year old system on life support. Restrooms were not ADA compliant, nor were there enough fixtures, especially for the busloads of school children that visit every year. The expanded mission included a catering kitchen and flexible space that could properly accommodate community gatherings, wedding receptions, and various other public and private events that had become a part of the life of the building. The challenge was to fit larger spaces and an expanded program into a building that could not be physically expanded, as changing the appearance or adding on was not an option if the character of the building was to be maintained.

As the project unfolded, the intent of Edward Durell Stone became more apparent. The scope of work also grew exponentially. For instance, the Granulux completely failed during construction, resulting in a custom invention of an exterior textured plaster and marble matrix to replace it. Walls were furred on the interior to accommodate insulation and climate control, and the deteriorated windows were replaced with double pane, thermally broken units containing frames that match the profile of the originals. A double stair was added on the east side of the plinth to access the island for outdoor events. Restrooms were made larger and accessible, and the cobbled gift shop was redesigned in the spirit of Stone. The mechanical system was also completely replaced with a high efficiency system.

A subtle, evolutionary move was executed in the watergarden. The four square pools originally did not have railings. At a depth of 18 inches, they were not needed according to code. The result was a sophisticated drama of sunken pools in the broad floor plain, with the curved double stair rising and contrasting to the gallery above. Legend has it that soon after the building opened, a nun was gazing up at the stair and the sunlight streaming in and fell backward into a pool. The reasonable but unfortunate solution was to add white steel picket fencing around the pools. While they accomplished their intent, they changed the aesthetic from the great western plains to pens in a barnyard. Everyone agreed the fences had to go, but safety was still a concern, so the solution was to enclose the pools with tempered glass. Upon entering the building, the transparent rails reveal the open plains, again putting the space and intent into perspective, a compromise that restores the feel and drama of the space.

Outside, the long-gone crabapple trees were replanted in the garden plots of the plinth and the long-dead up lights were replaced with LED, again illuminating this temple of history as it was intended.

As the rehabilitation project neared its completion in early 2015, the building was placed on the National Register of Historic Places. The rehabilitation of the Stuhr Museum of the Prairie Pioneer was also recently recognized by Docomomo at the 2017 Modernism in America Award ceremony with a Citation of Merit. The museum is celebrating 50 years through 2017.

In his Encyclical Letter Laudato si’ (LS), Pope Francis echoes both St. John Paul II and Pope Emeritus Benedict XVI in their call for an…

A WBLCA measures the Global Warming Potential (GWP) of materials used to construct a building. In addition to accounting for operational energy C02 emissions, a…

In 2017, Dan Worth and BVH, Paul Cohen and the Omaha Douglas Public Building Commission, and Evergreene Architectural Arts embarked upon the process of restoring…